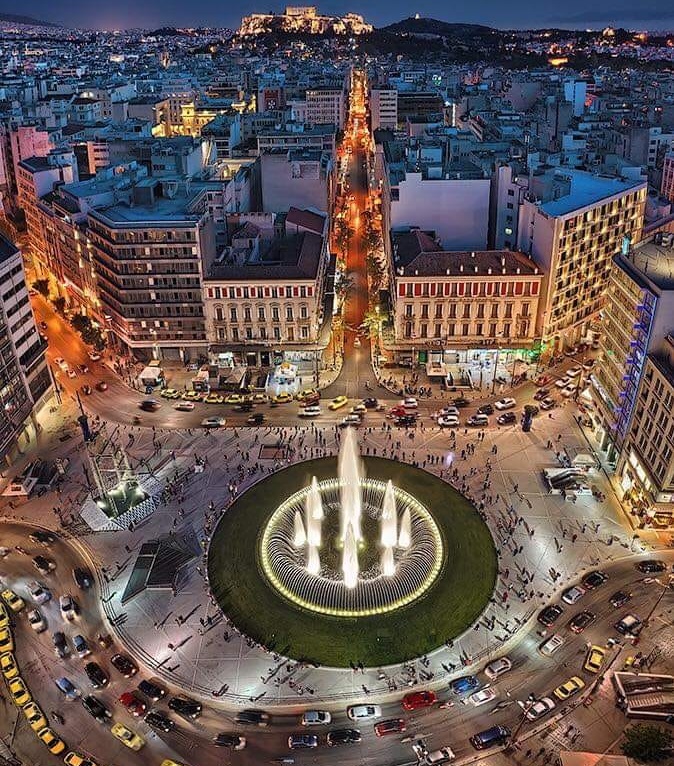 Omonia Square is literally the center of Athens, it is the point 0 from which all distances between Athens and the rest of the country are measured.

Created in 1846 under the name Palace Square and later Otto Square, in honour of King Otto, Omonia (Place de la Concorde) has gone through many transformations.

Originally planted with numerous trees, later to be removed when the metro station was created, Omonia has always been the social center of the city in the first half of the 20th century.

In 1988 the Dromeas (Runner) glass sculpture by Kostas Varotsos was placed in the middle of the fountain, until 1994 when the square closed for renovation due to the new Metro Line 2 and the Runner was moved to its current spot, in front of Hilton.

Omonia square, just before the 2004 Olympics is open to the public and the result is a square that has lost the original round shape, is easyer to walk from the surrounding buildings but unfortunately has lost the water element and is nothing but a big cement field, disappointing Athenians.

The only interesting addition was the 5 Circles sclupture by George Zoggolopoulos, inspired by the 5 olympic circles, that is a hydrokinetic sculpture, with the 5 circles moving using the flow of water.

Unfortunately due to technical issues in the square construction, the water was not being drained correctly, dripping into the metro station just below. So after the 2004 Olympics, the sculpture’s movement with water stopped.

The renovated Omonia Square of 2020 has been a surprise to Athenians! The so loved fountain is back, making the hot square a cool place to be in the summer and the 5 Circles sculture of Zoggolopoulos is again alive!

With eco-friendly material, that lower the temperature and are cooling the environment, your visit to Athens will not be complete with visiting the new Omonia Square.

There is no facebook feed selected or it was deleted.