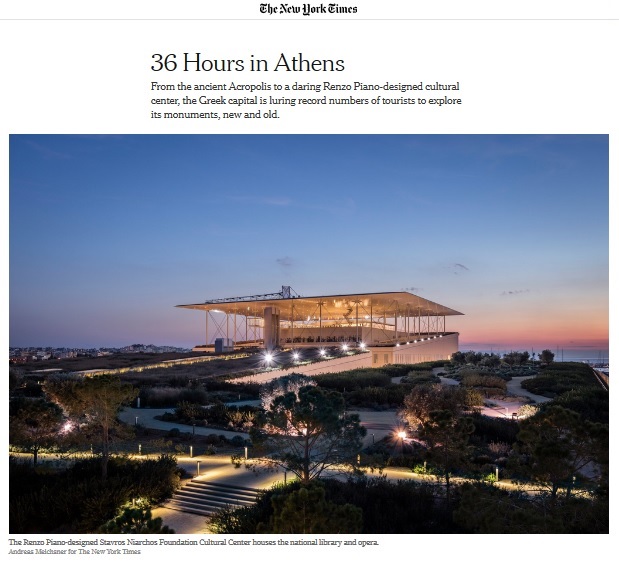 From the ancient Acropolis to a daring Renzo Piano-designed cultural center, the Greek capital is luring record numbers of tourists to explore its monuments, new and old.

There are cities that count their age by years; then there’s Athens, which can tabulate its history by millenniums. From battles and setbacks this ancient metropolis has rebounded again and again, proving itself to be resilient like no other. Sitting on a parfait of civilizations, the Greek capital could easily float on its past glories. But recent additions like the Stavros Niarchos Foundation Cultural Center prove that this city in the heart of the Mediterranean isn’t afraid to raise new monuments and leave a bold statement for posterity. With a dazzling culinary scene firmly grounded in the country’s traditions and soil — not to mention philoxenia, or the Greek notion of loving and welcoming strangers — it’s no surprise that Athens has greeted a record number of tourists this past year. Luckily for us visitors, there’s plenty to experience in this storied city.

Completed in 2016, the Renzo Piano-designed Stavros Niarchos Foundation Cultural Center houses the national library and opera on its handsomely manicured grounds dotted with young olive trees. Even if you miss the 10 a.m. architectural tour conducted in English, you can experience the complex’s varied spaces by dropping in on a free outdoor tai chi class or settling into the opera house’s maraschino cherry-hued chairs to take in the impressive acoustics. Or simply stand under the solar power-generating canopy roof to survey the 360-degree vista of Athens and the sea.

6 p.m. Keeping it in the Family

Hop off the free shuttle from the Stavros Niarchos Foundation Cultural Center at the Syggrou-Fix Metro station and lose yourself in the city’s latest “it” neighborhood, Koukaki. The once sleepy sidewalks lined with bitter orange trees have come alive with boutiques and cafes catering to young Athenians as well as European tourists. To understand Koukaki’s down-to-earth origins, though, take a deep breath of carbs and comfort inside Taki’s Bakery, which has been satiating neighbors since 1962 with kulouri sesame rings, rich cheese pies and by-the-kilo pastries. Across the narrow alley, the baker’s children are carrying on the Papadopoulos family tradition in gastronomy with Drupes & Drips, a teeny wine bar where you can recharge for the night with a freddo espresso, a shot of caffeine shaken with ice (€1.90, or about $2.20).

Many flamboyant hangouts have popped up around Koukaki, but its residents stay loyal to Fabrica tou Euphrosinos, a neighborhood restaurant that spills out onto the sidewalk. A meal here is a journey around Greece, with seasonal ingredients drawn from various islands in the country in addition to only-in-Greece cheeses and wines. From herb-rich zucchini salad (€8.20) to octopus slow-cooked in a clay pot (€18.40), each dish elevates rustic cookery with a touch of capital sophistication, living up to its name, which honors the patron saint of cooks.

Start your morning with a stroll in the central enclave of Anafiotika, with its whitewashed homes nearly stacked on top of one another. This geometric jumble of cottages was built in the 19th century by settlers from the Cycladic island of Anafi, Santorini’s diminutive neighbor. Here, flowers spill out of terra-cotta pots to adorn the labyrinthine paths where stray cats don’t as much demand as expect to be petted and adored.

Even the most off-the-beaten-path type of traveler would be sorry to miss the Acropolis, which rightfully takes up a lofty place above the city. The crown jewel consists of inimitable archaeological sites, including the Parthenon temple, engaged in a never-ending Tetris game of cataloging, restoring and fitting its many fragments (and replacements for missing parts). To visualize this symbol of Western civilization without the scaffolding, walk down to the Acropolis Museum where you’ll come face-to-face with a recreation of the intricate frieze that once wrapped around the temple. (Acropolis admission is €20; museum, €5).

The ancient agora at the foothill of the Acropolis doesn’t see any commercial action these days, so head instead to the vibrant Varvakeios Central Market, where vendors try to outdo one another’s shouts hawking fresh catches, colorful vegetables and fresh cuts of meat. The unpretentious butcher-to-plate restaurants around the market, like Epirus, provide the freshest option to brave a taste of patsa, tripe stew, or magiritsa, the lamb offal soup reserved for the early hours of Easter elsewhere. A few steps away from the market, the delicatessen of Karamanlidika serves small plates and shots of ouzo alongside a heaping meat board (€16) and smoked fish (from €5.50) in a restored neo-Classical building. If you’re after an edible souvenir you can legally take home, the nearly century-old Ariana Olives nearby vacuum-packs whatever you choose from the many barrels of preserved drupes.

Time travel to the Neolithic era then fast-forward through nine millenniums in the National Archaeological Museum (€10), which showcases priceless artifacts from the Mediterranean’s ancient civilizations. From the famous gold mask of Agamemnon to the sinewy Artemision Bronze statue, pottery fragments to exquisite jewelry, the museum’s timeless treasures stand as testaments to the longevity of art.

In central Athens, al fresco boîtes boasting views of the Acropolis and Lycabettus Hill grace countless rooftops of deceptively ordinary-looking cement blocks. One-year-old Anglais is particularly atmospheric, with fairy lights strung above a gregarious young crowd. A for Athens, off bustling Monastiraki Square, serves mythically titled drinks like Polyphemus the Cyclops, as well as a cobbler that features mastiha, the distinctly fragrant tree resin from Chios (€12).

Mismatched plates, vintage upholstery and Formica-topped tables may signal a hipster hangout, but the Cretan restaurant Aster has the substance to back up its quirky style. Dive into mezes like ginger-marinated salmon paired with lentil salad (€5.50) and fried meatballs topped with rich yogurt (€6). And don’t miss dakos, Greece’s answer to panzanella, with wedges of double-baked barley bread tossed with ripe tomatoes and creamy cheese (€4).

Wrap up your Saturday night in Psyrri, a former industrial district where hardware stores and design ateliers now coexist harmoniously. The leafy streets fanning out from Iroon Square are chockablock with rambunctious establishments that swing till dawn, but for an experience that best encapsulates how Psyrri toes that fine line between glamorous and grungy, head to Cantina Social. A coffee-sipping neighborly crowd gives way to an increasingly festive clientele as night goes on. To a soundtrack that can whiplash from obscure indie bands to unabashedly happy Latin pop, a diverse crowd of college students, media executives and, sometimes, drag queens, congregates in the courtyard where projections of old films turn the walls into pop art canvases.

Throughout the week, there’s no shortage of shops touting identical chess boards and uninspired T-shirts near the central hangout of Monastiraki Square. But only on Sunday mornings do eccentric hoarders take to Avissynias Square where they lay out a cornucopia of vintage curios. The real attraction of the flea market, however, might be watching Athenians of all stripes coming together.

In less than half an hour, the Metro whisks you from Monastiraki Square to the port of Piraeus, where ferries and cruises depart to faraway destinations. But you don’t have to be envious of those headed to Mykonos or Santorini even if you can’t venture far. Hydra, a 25-square-mile isle of intimate coves and hilltop monasteries, is just a 1.5- to 2-hour ferry (€28) ride away. There, weather-beaten fishing boats bob alongside luxury yachts in the harbor of the main town, also called Hydra, where most of the island’s 2,000 inhabitants live. After a meal of pan-fried cheese and plump anchovies at one of the many tavernas that line the promenade, head out of this picturesque town for a dip in the jewel-toned sea. You’ll have to walk unless you can convince one of the Hydriots to let you borrow a donkey: The island is blissfully free of motorbikes and cars.

There is no facebook feed selected or it was deleted.